Finding out about the problem of Marine Plastic

We probably started hearing about the problem of marine plastic at an event about turtles, held some years ago at the Royal Botanic Garden in Edinburgh.  I think that was the first time I met Calum Duncan of the Marine Conservation Society, and started to listen to the message he has been championing for many years now.

There is a regular beach clean at Cramond foreshore in Edinburgh, which runs at least once a quarter, and which we go along to as often as we can.  So when an invite from Nicola Holland of Funky Ella’s Travels popped into my mailbox, I was happy to sign up to go along to an event being organised by Susanne Arbuckle of Adventures Around Scotland.

Here’s Susanne introducing us to the serious theme of the day with a quote which has inspired her: “The greatest threat to our planet is the belief that someone else will save it” [Robert Swan, OBE, FRGS]. Susanne had taken this to heart, and not only talked about it, but took action to organise an event attended by a group of Scottish ‘content creators’ who she hoped would raise awareness of the issue and take action to turn the plastic tide.

The problem is that our seas are filling with plastic, which is affecting every part of our planet’s fragile ecosystem. The Marine Conservation Society works to raise awareness of these problems, and campaigns to protect our seas and the marine life there. 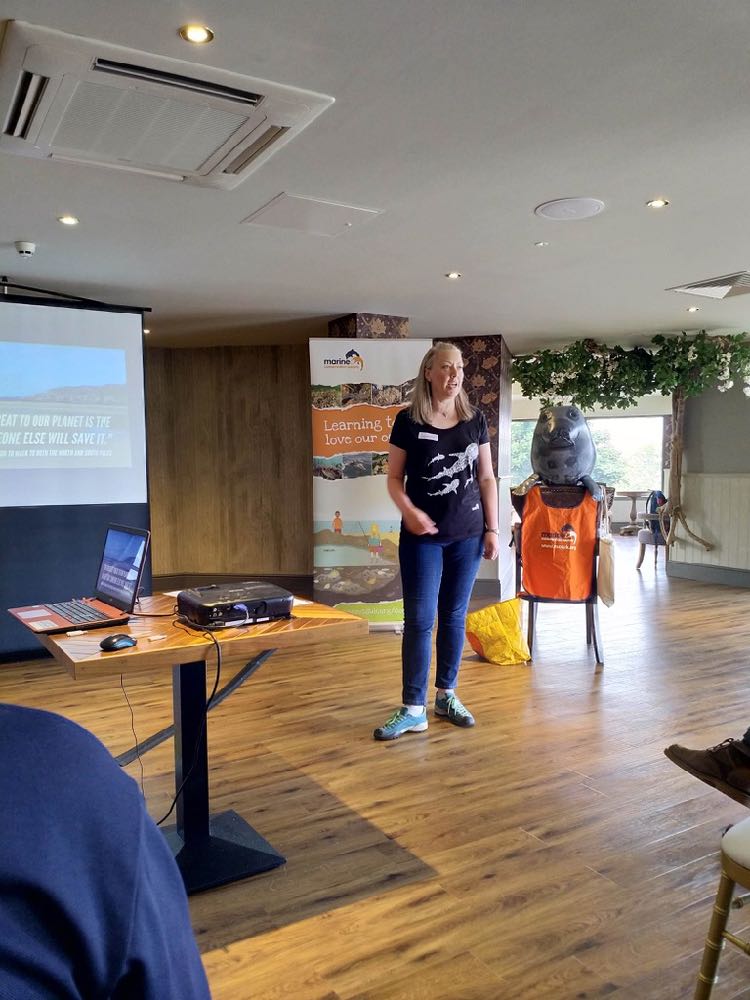 Suzanne of Adventures Around Scotland

There had been some recent publicity surrounding the state of the beach which sits close to the Queensferry Crossing – Ferrycraigs Beach which was dubbed by the press “worst for nurdle pollution“.  I had read the articles, and thought that maybe there wouldn’t be much left for us to pick up as there had been several beach clean-ups there.  How naive of me… it didn’t take long to find out that the beach still needed plenty of help. 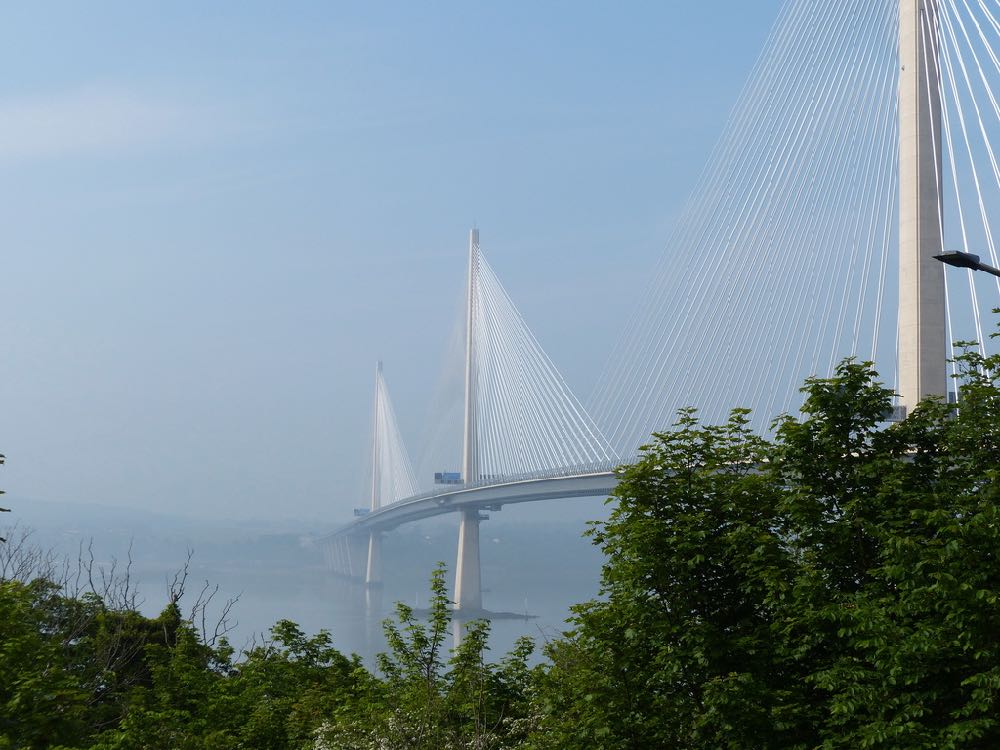 We headed down to Ferrycraigs Beach to get organised for our beach clean and find out what awaited us.  As veterans of several Cramond clean-up surveys, we thought we had experience of seeing beaches in grim states, but this was a whole new level. 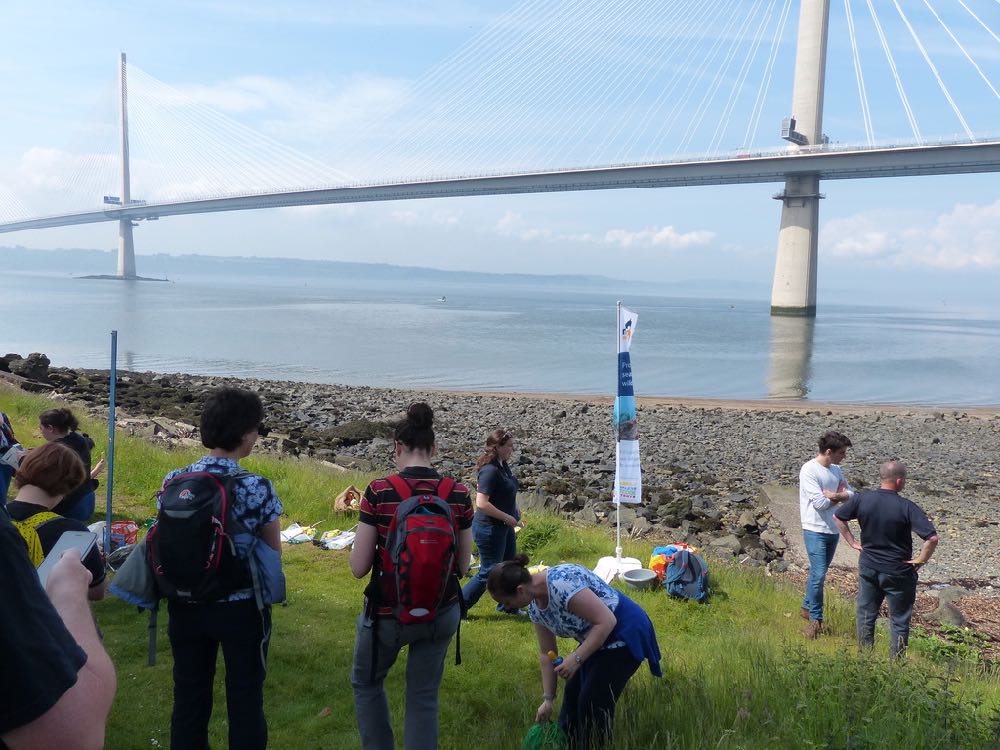 The task ahead – cleaning the beach at Ferrycraig

It was really hard not to just go into a decline about the state of the beach, after all we were only working away for an hour and there was just SO MUCH plastic there.  The problem with collection was that the plastic was mixed up with a lot of broken down wood, so was difficult to separate.  As we were only allowed to pick up while wearing gloves, it made collection of these tiny objects really tricky. We really needed some sort of sieve to carry out the separation exercise. 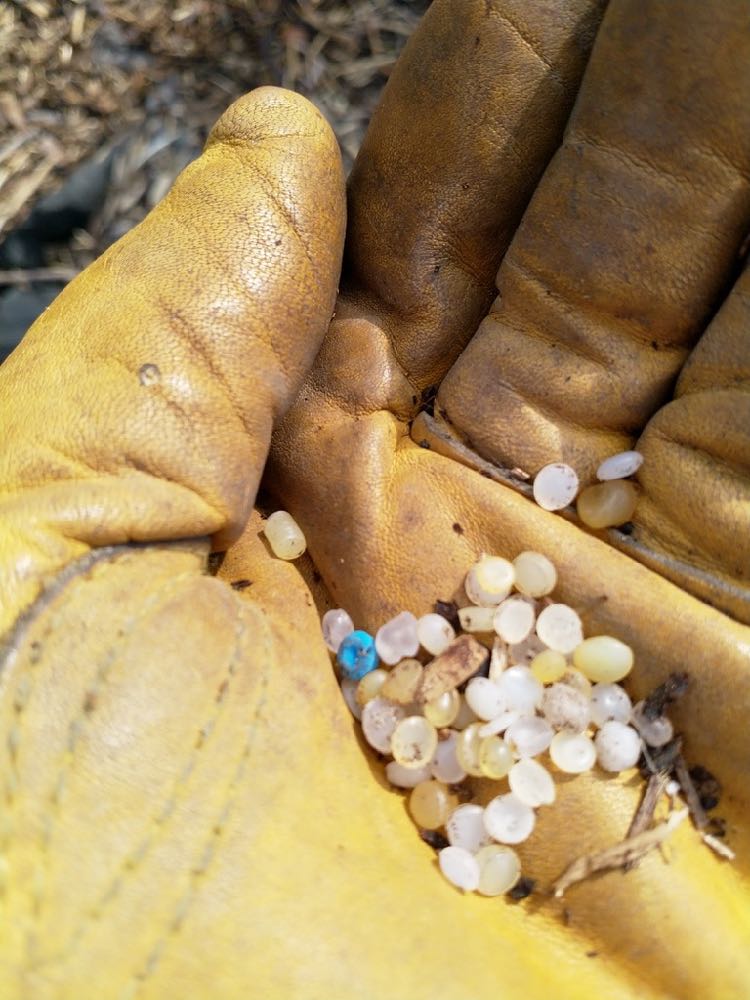 After our allotted time of collection we gathered to weigh the results and Catherine Gemmell of MCS UK talked about the number of cotton bud sticks and nurdles which had been collected. During our break for lunch, Catherine completed the task of collating the data from the data sheets which the teams had used to record the different types of waste picked up.  It’s information like this which makes joining an organised beach clean so important.  Instead of just picking up waste and binning it elsewhere, the data is used to put pressure on policy makers in governments and in business to be a catalyst for positive change. 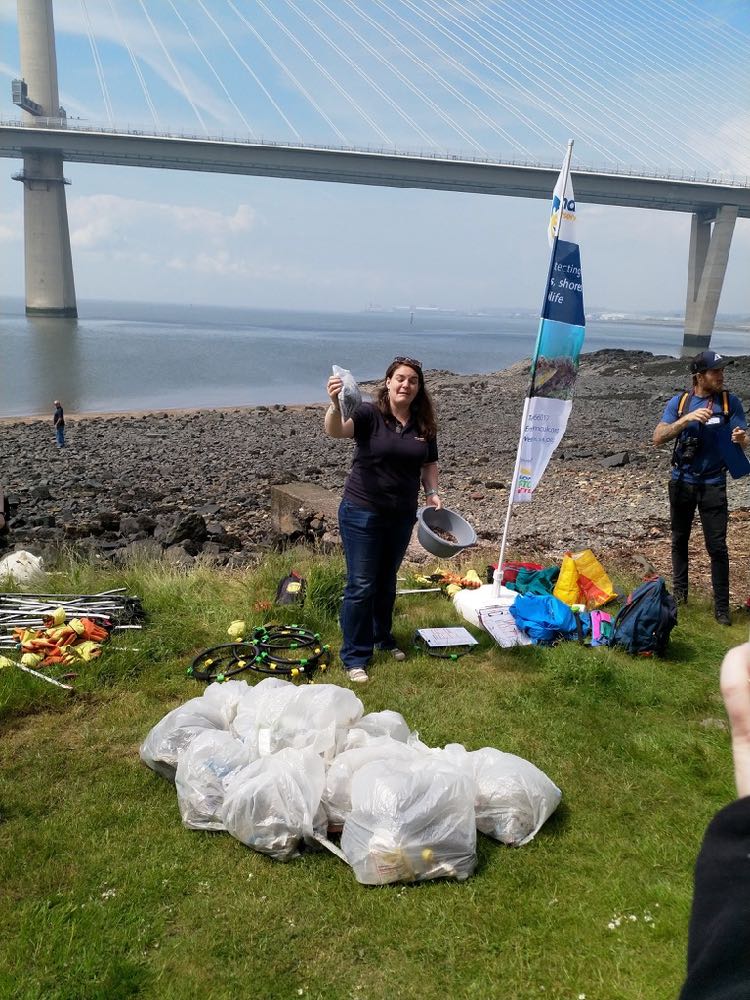 Cleaning up the Beach at Ferrycraig

Meanwhile, another of the teams had been finding out just how long plastic waste can hang around in the sea: this washing-up liquid bottle was a genuine vintage find.

It had been a thoroughly depressing morning: how could we make a difference, and what could we do to continue to help?

When you’ve spent the morning getting more and more concerned about what you can do to help, it’s good to have positive people like Catherine Gemmell of MCS UK around to make sure you understand how you can take individual action to change your own behaviour.

Back at the hotel, Catherine had laid out a few samples from her own “action pack” for us to take a look at. 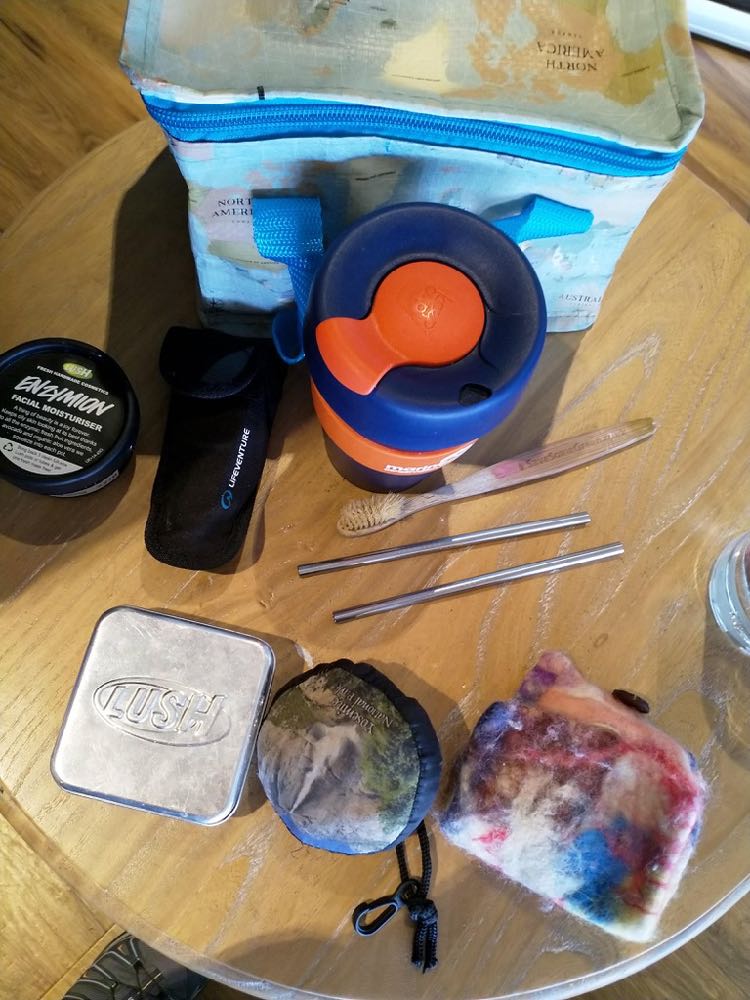 Ideas for reducing your use of single-use plastics

Our education continued with talks from:

Alasdair Neilson from FIDRA about their work in publicising nurdle pollution and campaigning to have micro-beads removed from cosmetic products.  He has a specific interest in looking at the language used to communicate environmental issues.

Robbie Blyth from Fife Coast and Countryside Trust about the work they do throughout Fife to look after the natural environment, including the beaches around the Fife Coastline.

As a treat after all our hard work and learning during the day, we headed to South Queensferry for a cruise with Forth Boat Tours on the Forth Belle, picking up visitors from Inchcolm and sailing under the three Forth bridges. We were delighted to have the skipper point out some puffins flying and bobbing around Inchcolm.  On the return trip, we passed close enough to this rock where cormorants were nesting. A chance to catch a glimpse of the hazards of marine plastic – can you spot the nest which contains orange rope or netting? 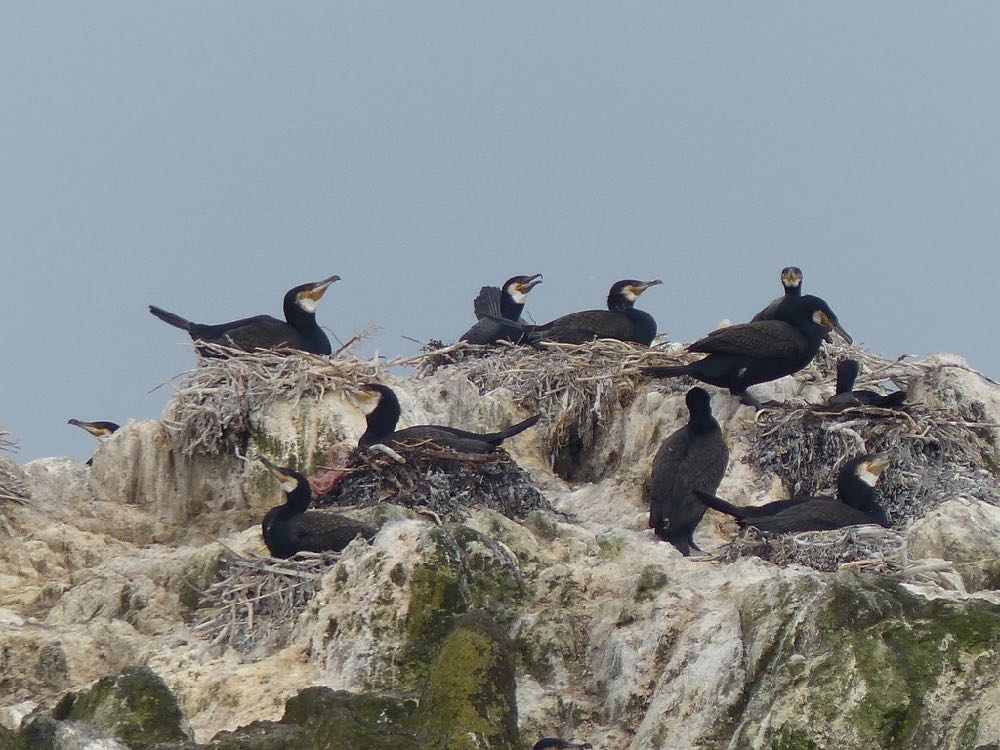 This nesting site is within sight of the Queensferry Crossing – that’s the one of the pillars in the distance. 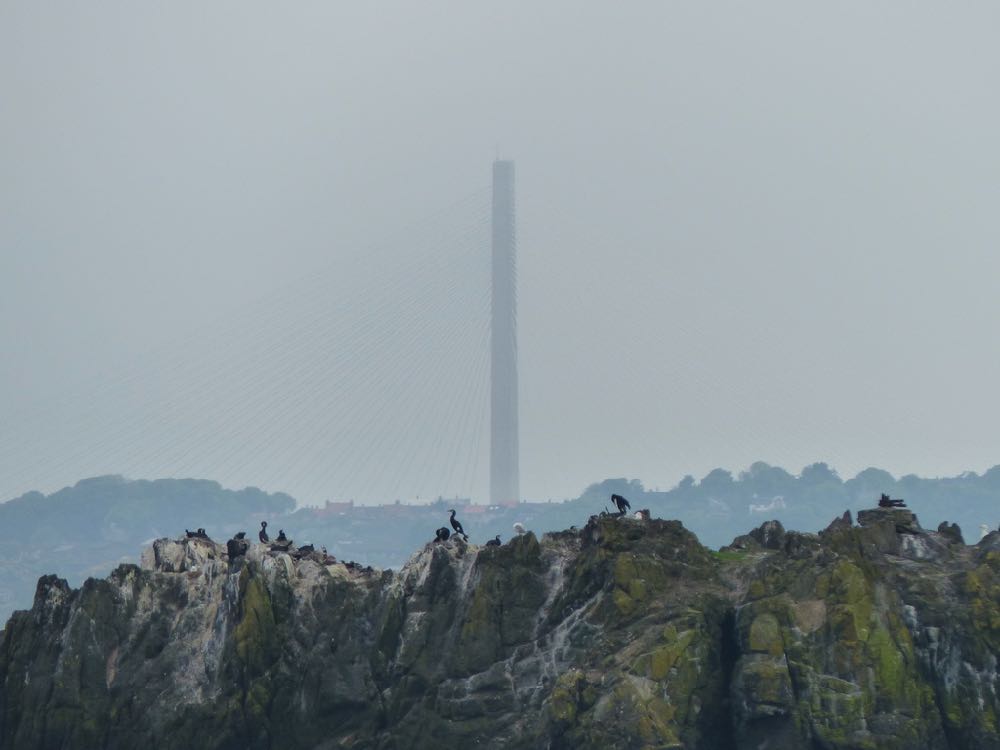 It’s taken a few weeks after the event for me to write up this post, partly due to being shocked at the extent of the pollution which we had seen so close to home, and also to give time for due reflection on real changes which I could take as a result of the information which I had gathered.

The first thing was to give some of the ideas which Catherine had suggested a try: 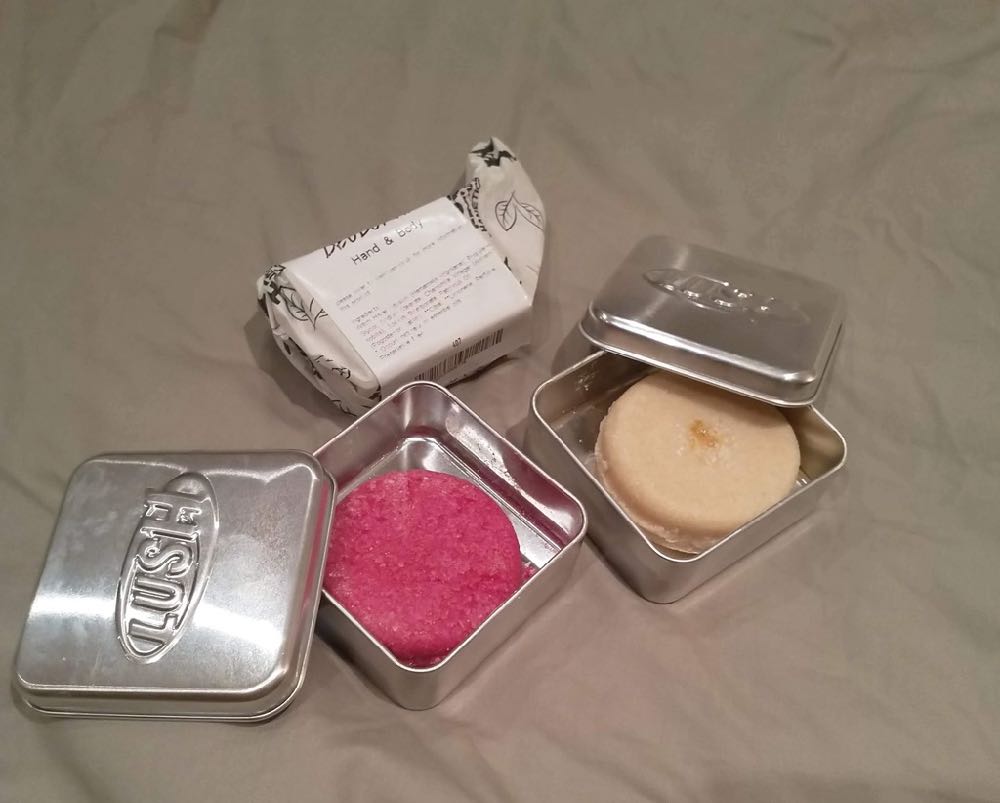 The next thing was to think more about how I could prepare for the challenge of reducing plastic in every day life, so I ordered the book and went on another beach clean at Cramond:

It’s almost July and that’s when the #goplasticfree challenge begins. We’ve been down at Cramond beach this morning with @mcs_uk participating in the regular beach clean and helping gather data to inform future policy. Every little baby step helps. Next quarterly clean is 15 Sept, but lots of other activity happening before then.

I hold my hand up here, I’m just not ready to #GOplasticfree during July, but if you’d like to find out more, then read all about it.  Maybe, like me, you’ll take the steps to cut out plastic, and at the very least make sure that you are an ace re-cycler.

Read more about the #ShoreYouCare event

Marine Conservation Society – Susanne’s article “Beach Clean with Scottish Bloggers” which has links to many of the other blogs, vlogs and articles written about the event.